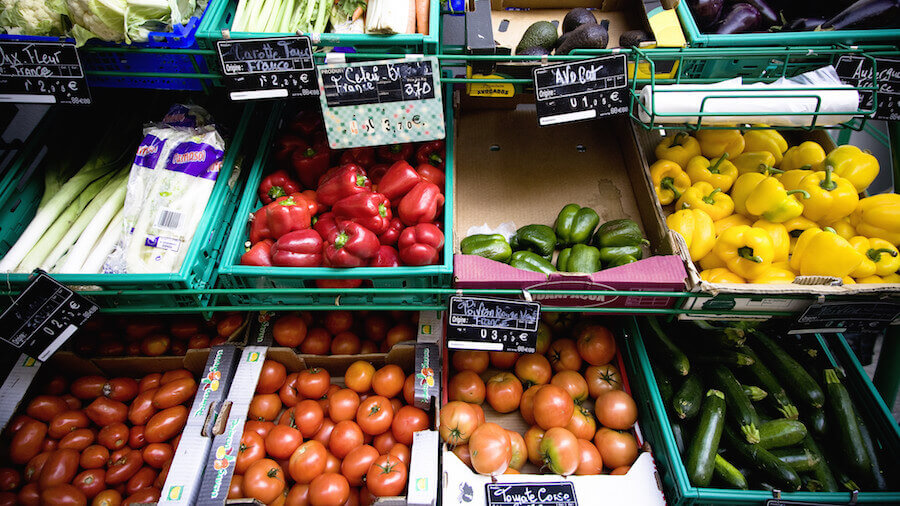 [Maria’s Note: Up until three months ago I used to buy organic, without exception. It’s not as if I had ever studied the organic vs. non-organic food issue, and hence made the decision to go organic. I went organic because I *thought* it would be better for me.

My first wake up call was right after I researched the organic milk vs regular milk issue. That’s when I realized that, to my surprise, I had to ditch organic.

I’m super-excited to have Iida, a science communicator today on the blog. She’ll talk about the organic vs. non-organic differences in the nutritional value of food. Give her a warm welcome!]

I used to buy Organic, without having researched organic vs. non-organic

I spent over a decade of buying little else than organic food. During that whole time, I never justified my choice by claiming that non-organic vegetables were less nutritious or somehow less healthful.

(I just thought that the environment was better off with organic farming. That is another story: Natural assumptions and On farming, animals, and the environment.)

It was first a couple of years ago that I became aware of people claiming that organic produce would somehow possess a superior wholesomeness. I was confused, and when I learned of an extensive meta-analysis (The Stanford Study) which had concluded there was no nutritional difference between conventionally and organically farmed food, I wasn’t fazed. Why would there be a difference?

For a discussion on that The Stanford Study, you can see this article News in Standford medicine – Little evidence of health benefits from organic foods:

“The most comprehensive meta-analysis to date of existing studies comparing organic and conventional foods.”

Or you can also find here a direct link to the paper – behind paywall.

Still I kept running into arguments insisting that the jury was still out there, or that, indeed, that organic food was most certainly superior. If any evidence is provided, it may often be in the form of an anecdote – that people can taste the difference. This is a poor way to truly determine nutrition (or truly, even taste perception, as being told the food is organic makes people rate it higher).

I have heard people argue that organic food would be more nutritious than non-organic food. Usually, as evidence of this view, they have presented this meta-study, titled: “Higher antioxidant and lower cadmium concentrations and lower incidence of pesticide residues in organically grown crops: a systematic literature review and meta-analyses.”

I will call it the High Antioxidant study. I’ve written about this topic earlier as a case study of bias – Am I biased? Are you? – but to cut to the chase, I will include only the summarised review of the science here.

Shortly, sould we start buying organic food to reap health benefits? No. Several comprehensive reviews support the view that there are no nutritional or health benefits from organic products. I will lay them out for you below.

To know more about the robustness of the conclusion reached in the High Antioxidant study, I searched for critical evaluations on it. The next logical step after that was to compare it to other similarly extensive sources – other reviews and meta-analyses.

First I found a source, Science 2.0, criticising the High Antioxidant study for being too inclusive, for not dismissing studies with flawed methodology. From Science 2.0:

They used a lot of papers, that is a good thing if there is actually a large body of knowledge and it is rigorous, but in even the most controversial toxicological issue, the EPA will end up disqualifying all but about a dozen papers due to lack of underlying data being included or methodological concern. In a review, they look at no data, of course, and 343 papers becomes the problem rather than the solution when the methodology is flawed.

Meta-analysis, as everyone with statistics knowledge knows, can boost the strength of systematic reviews when done properly but easily suffers from bias unless the researchers are truly interested in controlling eligibility criteria and methodological quality.

Without controlled eligibility, it’s easy to find any pattern you want. With Web of Knowledge search terms like ‘organic’ and ‘biodynamic’, it’s really easy to skew the inclusion. Then they synthesized their dramatically different studies using a random effects model.

There was also criticism of the study’s claims that antioxidants reduce risk of chronic illness, both by Science Media Centre, Nutritional content of organic and conventional foods, and pharmacologist Ian Musgrave over at The Conversation, Organic food is still not more nutritious than conventional food:

While consumption of antioxidant containing fruit and vegetables have been associated with better health outcomes, the antioxidants themselves do not appear to have any role in this effect (see also here, here and here), despite the number of television advertisements that exhort us to buy antioxidant enriched food. Indeed, the major finding is that high concentrations of fat soluble antioxidant vitamins are associated with detrimental effects.

Ian Musgrave points out the lack of significance in the difference of vitamin and antioxidant levels – carotenoid in fruits was 50% higher, for instance, but then, fruits are a poor source of carotenoid all in all, and our intake mainly comes from vegetables, which have much more carotenoids, and the vegetables showed no difference between organic and non-organic.

Organic apples had 6% more vitamin C. For recommended daily intake you’d need 5.3 organic vs 5.6 conventional apples. Pesticide and cadmium levels were likewise low for both, with no demonstrable harm from residue of either (the food we have in the western world is the safest humans have ever eaten, and pesticides are one of the least of our worries, see more here and here).

Ian Musgrave continues with the context of natural variability:

the nutritional value of foods is very variable, influenced strongly by local regional factors, variations in growing seasons and rainfall, ripeness of food when harvested and time of harvest. I’m writing this is South Australia, possibly the wine capital of Australia, where we know that having vines on the different sides of a hill will affect sugar and flavor of the grapes. Even different cultivars of the same crop may vary significantly in composition due to the factors above. Nutritional values of crops can vary from between 100% to nearly 200% (which should be kept in mind when the differences reported between conventional crops and organic crops run from 6-69%).

So perhaps the High Antioxidant study didn’t reach such a strong conclusion for benefits of organic produce after all. I had earlier read a report of a study that came to a different conclusion. Being a non-expert with limited time and resources, I was not actually sitting down to read through to understand in detail the studies’ merits myself.

My bias might let me take the word of one, and falsely ignore the points of the other. How could I avoid that? My best approach would be to see what wisdom yet other reviews would bring to the table.

The Conversation mentioned two other reviews concluding no difference. I found that a medical science blogger, Steven Novella MD, had made a summary of the existing meta-analyses on the topic. He had looked at the High Antioxidant study and laid it out with four other reviews on the topic. He begins with a great principle of how to approach a scientific question.

Whenever I am trying to quickly grasp the bottom line of any scientific question, I look for a consensus among several independent systematic reviews. If multiple reviewers are looking at the same body of research and coming to the same conclusion, that conclusion is likely reliable.

In this case, there are three [he later added a fourth, see below] other recent large systematic reviews and meta-analyses of the same research on the nutritional content and safety of organic vs conventional produce. The other three studies all came to the opposite conclusion as the current [High Antioxidant] study.

Here are the studies, a 2009 review by Dangour et. al. concluded:

On the basis of a systematic review of studies of satisfactory quality, there is no evidence of a difference in nutrient quality between organically and conventionally produced foodstuffs. The small differences in nutrient content detected are biologically plausible and mostly relate to differences in production methods.

From a systematic review of the currently available published literature, evidence is lacking for nutrition-related health effects that result from the consumption of organically produced foodstuffs.

And a 2012 review by Smith-Spangler et. al., which I had read about earlier (the ‘Stanford study’) found:

After analyzing the data, the researchers found little significant difference in health benefits between organic and conventional foods. No consistent differences were seen in the vitamin content of organic products, and only one nutrient — phosphorus — was significantly higher in organic versus conventionally grown produce (and the researchers note that because few people have phosphorous deficiency, this has little clinical significance).

Novella adds another 2002 review which also finds no nutritional difference.

Organic vs. non-organic food: No measurable difference in nutritional content

At this point I am satisfied with my conclusion on the organic vs. non-organic food debate. It must be reasonable to assume, that should there be a stable measurable difference in the nutritional content of organic food, other reviews would be able to arrive at that conclusion independently of each other.

Instead, we have four reviews on similar lines – finding no nutritional or health benefits of organic food. Then we have one study stating a different conclusion, but at a closer look demonstrating very little differences for a few nutrients, likely at a level of no consequence for our health or nutrient intake.

Could the four of them be deeply flawed and the High Antioxidant one be the best of the bunch? Could future studies show a much greater difference in nutrient content? That is possible, but based on the evidence at the time, it does not seem likely.

Are you surprised by these findings? And are you buying organic or non-organic? Leave a comment and let me know!

This piece has also been published by the Genetic Literacy Project. Iida Ruishalme is a Finnish writer and a science communicator who holds a M.Sc. in Biology from Sweden, and is now living in Switzerland. Her interests range from cell biology, health, and environment, to society, psychology, and the meaning of life. She blogs over at Thoughtscapism.

8 Responses to Organic Vs. Non-Organic Food: Which One Is More Nutritious?

+RESULTS DISCLAIMER: When addressing results in any of our websites, videos, newsletters, programs or other content, we've taken every effort to ensure that we accurately represent our programs and their ability to change your body and improve your life. However, the Company does not guarantee that you will get any results using any of our ideas, tools, strategies or recommendations, and nothing on our Sites is a promise or guarantee to you. Results may vary on an individual basis.

You alone are responsible for your actions and results in life which are dependent on personal factors including, but not necessarily limited to, your skill, knowledge, ability, dedication, consistency, personal ethic, to name just a few.

++NOTICE: State law allows any person to provide nutritional advice or give advice concerning proper nutrition--which is the giving of advice as to the role of food and food ingredients, including dietary supplements. This state law does NOT confer authority to practice medicine or to undertake the diagnosis, prevention, treatment, or cure of any disease, pain, deformity, injury, or physical or mental condition and specifically does not authorize any person other than one who is a licensed health practitioner to state that any product might cure any disease, disorder, or condition