When creating new habits no doubt the whole idea of going to the gym, eating a load of green stuff, and rustling up more meals from scratch took up a lot of headspace; it required planning, focus, and attention to stay on track.

As the weeks went by, things started to get more autonomous though: you found yourself naturally gravitating towards the gym after work, you unknowingly reached for an apple instead of a mars bar, and you instinctively headed straight to the fruit and vegetable aisle at the beginning of your weekly shop.

In other words, these behaviors became habits: Behaviors that you do without really thinking about them.

What all these habits have in common? They’re on autopilot. Almost mindless!

I know years ago when I decided that living a long and healthy life was important to me, I had to think really hard about how I would make that happen; how often I’d go to the gym; what exercises I would do; what I would consider as a success; what my gym support system would be – just to name a few.

But gradually and with repetition the habit was getting stronger. At this point, exercise is just part of like. It’s what I do and when I don’t do it, I feel weird, like something is missing. When you’ve reached the “something is missing status” then you know you’re at habit level!

Now what if you had more mindless habits, only those were habits you were actually proud of?

Wouldn’t it be nice to have most healthy behaviors be part of a routine that you just do, without having to stress over it?

(I’m assuming you’re nodding a silent “yes.” If not, why are you even reading?)

The question then becomes, how do you build that mindless but healthy routine?

How Not To Go About Creating New Habits: Using the Suffering Mindset.

As we covered in the Habit Loop, suffering – pushing yourself, beating yourself up, forcing yourself to exercise or stop eating, does not work for creating new habits. It’s seductive because suffering does work for short term goals:

Really, if you haven’t read The Habit Loop: Why Forcing Yourself Into Shape Will Not Form Better Habits, then do so now. It’s prerequisite reading for this article.

Did that? Now let’s move on to The Behavior Model.

The Behavior Model: The 3 Elements To Successfully Creating New Habits

In the the Fogg Behavior Model, Dr. BJ Fogg, a behavior change scientist from Stanford University and director of the Persuasive Technology Lab, says there’s 3 elements that determine whether you perform a behavior or not. Notice that you need all 3 CONCURRENTLY in order to actually perform the behavior. Having only one or two of the three won’t work.


#1. Motivation: Do you want to do the behavior?

First off, you have to be sufficiently motivated to do it. Take the news year gym resolutioners for example. After all the mince pies and prosecco of Christmas and new year, motivation levels are high and many will try to create new habits like hitting the gym to drop some excess poundage. Come the end of January or February, motivation often drops, which may lead to the complete cessation of the gym going behavior.

For example, you might be motivated to go to the gym for the pleasurable release of endorphins, the fear of becoming weak and unhealthy, and/or because that’s where all your friends hang out.

If you push to do something you’re not really all that motivated to do though, you’re unlikely to do it consistently and therefore it won’t become a habit.

Now before you think “I knew it! I just need more motivation!” hold on a sec. Motivation is part of the deal and you don’t even need that much of it. But it’s flashy and it matches the “hero” narrative, hence why we overestimate motivation.

#2. Ability: How easy or difficult is the behavior?

Your ability to actually carry out the behavior is also important. In how many days to form a habit I gave an example that a newbie gym goer would most likely find it more difficult to create a new habit of going to the gym compared to a more athletic person. This is partly because of a difference in their ability to do the exercises and train. Similarly, a mathematician is more likely to take on a fiendishly difficult Sudoku than someone less arithmetically gifted.

So if you find a behavior difficult, you’re less likely to do it.

But how do ability and motivation work together?

Now back to the gym goer example; if the novice, and less able gym goer was highly motivated, surely they might still go to the gym and it could become a habit right?

Yes, correct. So an individual’s ability and their level of motivation are in a bit of a trade-off.

*This is with the caveat that you have an effective trigger to the behavior.

#3. Trigger: A nudge to do the behavior

You could have all the motivation and ability in the world, but if you don’t have an appropriate trigger, then you won’t carry out your chosen behavior. So having an effective trigger for your habit is damn important for kicking off the loop.

A trigger can be anything from a simple thought, a visual cue, a location, time of the day, all the way to an email reminder.

For example, say you sign up for the 5 pm Zumba class. Your schedule is open and you’re excited to attend. So you have both ability and motivation. But what if you forget?

You end up not going to class. That’s what happens when there’s no trigger to nudge you into action. Adding the class in your calendar for example could have prevented that issue.

You need to have motivation-ability-trigger exist concurrently if you’re to actually make the behavior happen.

The graph above shows the interaction between the three elements to successfully creating new habits. If you’ve got sufficient motivation and ability, you’ll be above the activation threshold so when you experience the relevant trigger, you’ll carry out the behavior. However, if motivation and/or ability are low, then you’ll be below the activation threshold where a trigger doesn’t initiate the behavior.

So when I started this article I talked about how we need to set discipline aside and start thinking of the lifestyle changes we want to make happen from a habits perspective instead.

We then covered the basic theory around habits. It’s now time to apply this theory to real world examples.

Say you’re getting in shape for your vacation. Will the new gym routine become a habit?

Here’s an example using my fictitious friend Sue to help put this all together.

Sue’s got a holiday lined up, and one where she’ll be lounging on the beach, cocktail in one hand, crime/thriller in the other. So understandably Sue wants to tone up a little before jetting off to the sun, and she knows that she needs to start hitting the gym to make it happen.

Because her holiday is just a couple of months away, Sue’s motivation to hit the gym is at an all-time high. Having previously worked with a personal trainer, she’s also clued up on proper exercise form and therefore has the ability to crack on and get the job done when she enters the gym.

So both her motivation and ability are high, placing her on the top right of BJ Fogg’s model (scenario 1). Now all Sue needs is to identify an effective trigger to kick off the loop. Like a lot of us, she has a pretty consistent daily schedule, travelling to and from work at the same time throughout the week. This acts as the perfect trigger and each time Sue jumps into her car to make the journey back from work, she triggers herself to head off to the gym. Provided Sue is regularly repeating this behavior and if not happy then at least neutral about exercise, it will eventually become a habit and she will trim up for her holiday.

Say you’ve just had a baby and want to get in shape. But you’re way too busy. Will you get into action?

Let’s look at another scenario where Sue would still like to tone up, but in this instance, she has just had a baby boy. Her days (and a fair chunk of her nights) are taken up by caring for her baby and she can think of nothing less inviting than the sight of the treadmill at her local gym.

So unsurprisingly Sue’s motivation to drag herself to the gym is pretty low. Because of her previous personal training, her ability is still high, however, the trade-off between motivation and ability doesn’t favor performance of the gym going behavior. In other words, she’s in the bottom right of the model and below the activation threshold (scenario 2). This means that even an effective trigger won’t cue her to hit the gym and work out.

What can Sue do to still achieve her goals of getting in shape, despite the fact that she’s busy and suffering from “mommy brain?” She can increase her ability. For example, doing a 20-minute HIIT workout in the comfort of her own living room would be much less demanding than heading off to the gym each night where she’ll need to spend at least an hour or an hour and a half. This simple alteration may now lift her above the activation threshold and ready to exercise when triggered to (scenario 3).

So as you can now see, creating new habits is not about discipline and doesn’t just routinely happen because of a resolution.

Please note that if you’re feeling like a martyr then you’re most likely doing it wrong and are not making your brain wire any habits, despite the repetition. Again, go over The Habit Loop article for more details on that.

Still unsure how to put this together? Sign up below for the Mini Habit Week if daily exercise is something you want in your life or check out my best-selling book “Surprisingly…Unstuck: The Power of small healthy habits in a world addicted to instant results.”

Ready to put your newfound knowledge in action? Leave a comment below and let me know what habit you’re planning to create! 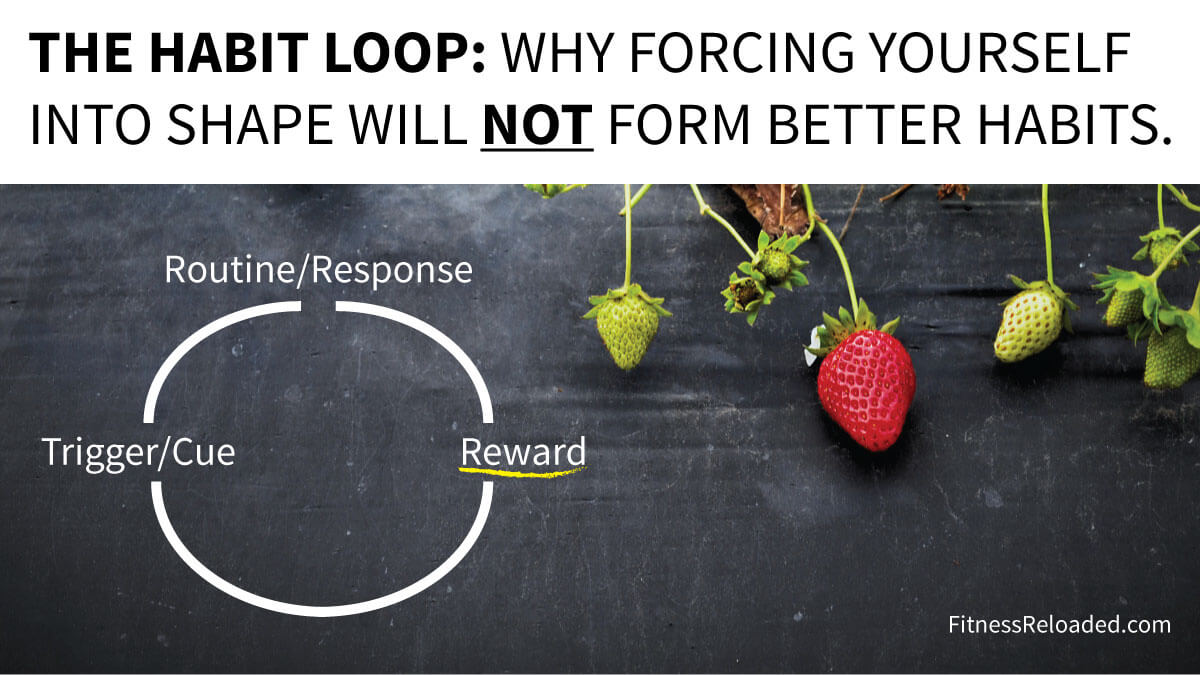 If you get how the habit loop works, you’ll never dare whip yourself into shape, ever again. Here’s how to really get lasting results & lasting habits.

Fitness Reloaded proudly introduces the “How to exercise daily” series! The purpose of this series is to learn how to make daily exercise an almost…effortless…

Have you ever wondered, how to start exercising, how to stop forgetting your stuff at home, or how to be more focused throughout the day?…

Mindless Eating – The Nr. #1 reason people get fat as they age. They put on 4-5 pounds every year. In just a few short… 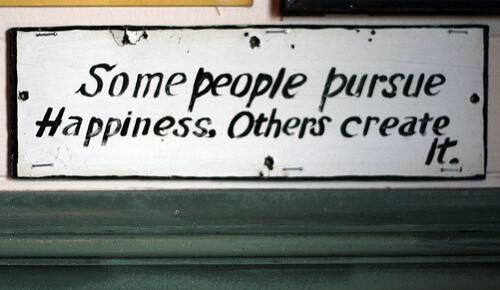 Can you be a happier, healthier person in one week? I say yes. If you start today, then by Monday you will already have a…